It’s a busy season – at work and life. I’ve fallen way behind on my blog reading – looks like Feedly is telling me that I have 289 unread posts.

Let’s catch up today, shall we?

The Purl Bug is moving! When Mr. Pentulant moved to NY, he did it in just one (little) car. And when we moved to California, we only had the clothes on our back for awhile (what a story that is!). I’m craving minimalism lately.

That’s it – have a great week, everyone!

‘Tis the season, friends.  Work is super-swamped in a fabulous way, Thanksgiving is mere days away, and I’m happily losing track of the hours.

I need a Chop.

Penucopia talks about TWSBI, their history, some issues, and why they are so popular. A good read.

A look at the Levenger True Writer from The Pen Addict. This isn’t a pen I’ve given much consideration – maybe time to think again.

There’s not much time left to get in on the KarasKustoms and Mr. Mike Dudek Kickstarter. I’m in. Are you?

Folks over on FPN are pondering the imponderables.

Have a wonderful weekend.  Mr. Pentulant and I are putting up our Christmas tree and getting ready for Thanksgiving festivities. 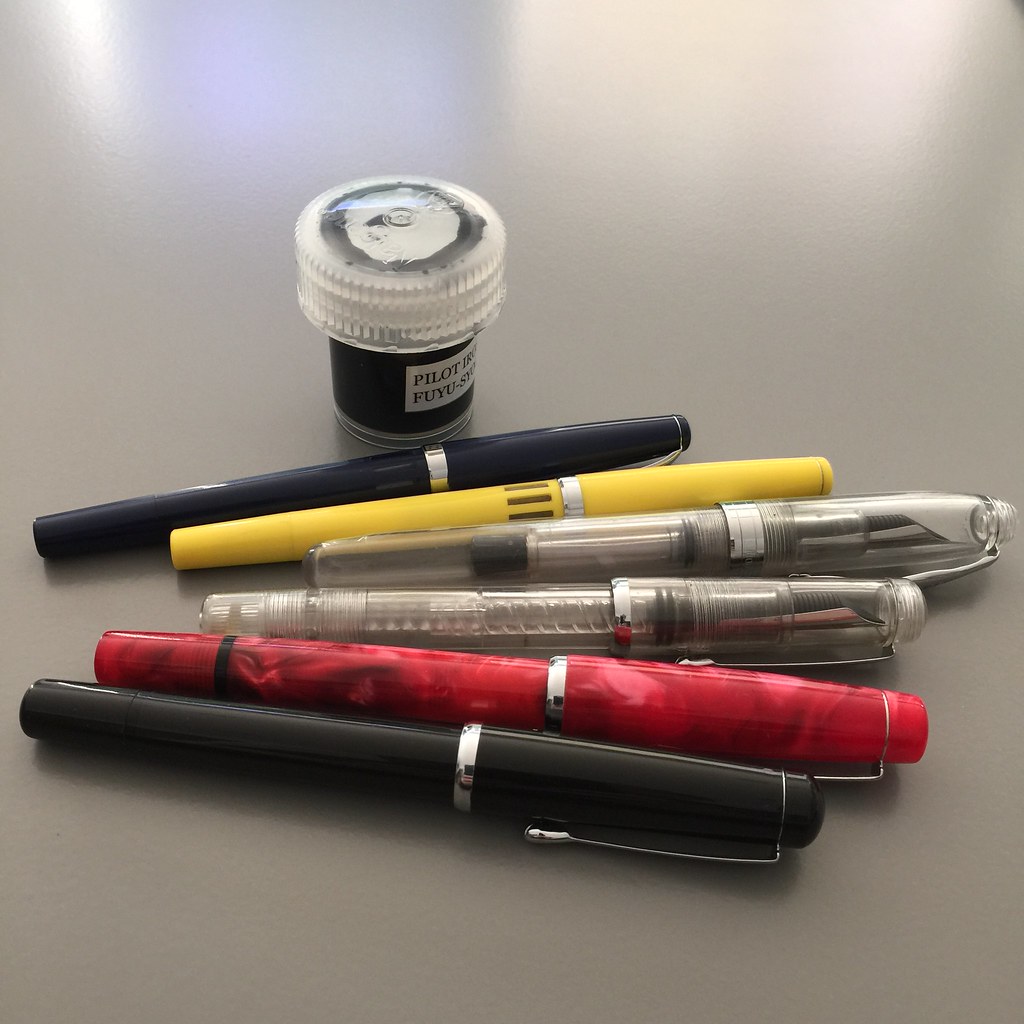 Feeling inspired, I found all of my Noodler’s fountain pens and a container of one of my most reliable inks – Pilot Iroshizuku’s Fuyu-syogun.

This one accepted the ink easily. I love the blind cap covering the twisty thing for the piston. If you’ve ever accidentally twisted a twisty thing and gotten ink all over the place, you know what I’m talking about here.

I tried. I did a little scribbling, a little shaking. I gave the piston a little twist. I looked at the alignment of the thing to the other thing.  Yeah. No.

The Nib Creaper is super-slim and has a great ink window – stylish and functional. I love the way they look.

How do they write?

It started out so well, but quickly became inconsistent. In the image above, it’s easy to see that the writing is darker at the top of the page and lighter as I near the end of the top paragraph.  There were also some hard starts. The flow just wasn’t right.

You know what makes me crazy? Inconsistent fountain pens. Work or don’t work, darn you!

OK! Alrighty! The blue Noodler’s Nib Creaper (why is it named that??) is kind of nice! It writes, it’s fairly smooth a bit of happy feedback. It flexes! And it recovers quickly from railroading – very nice!

I’m going to call this one a win. For those keeping score, that is one win out of three pens.

A black version of the Konrad Flex. Love that big ink window and, again, a blind cap protecting the piston’s twisty thing.

This pen wouldn’t take up the ink. I tried several times, several different ways. I took the thing out of the other thing, adjusted it a bit, and tried again.  No go.

Pretty sure the Ahab is the biggest of the Noodler’s pens. It fills with a plunger mechanism (fancy!) and looks like it could easily be converted to an eyedropper (but don’t quote me on that).

This is a pen I’ve reviewed in the past.

The ink sucked right up into the pen and I was feeling hopeful.

The Ahab wrote decently – until I started flexing the nib.

What’s the score now? Is anyone keeping track?

This pen is pretttttty. I really really wanted it to write well.

It wrote fine! Passed all but the hardest of the hard flexes. Seems like it recovered well from the over-flex.  I like it! Thank goodness because it really is a looker.  In fact, when Mr. Pentulant saw it, he asked, “Are you sure that’s a Noodler’s?” Ha!

I set all of the pens aside overnight and came back to them the next morning. How’d they do? 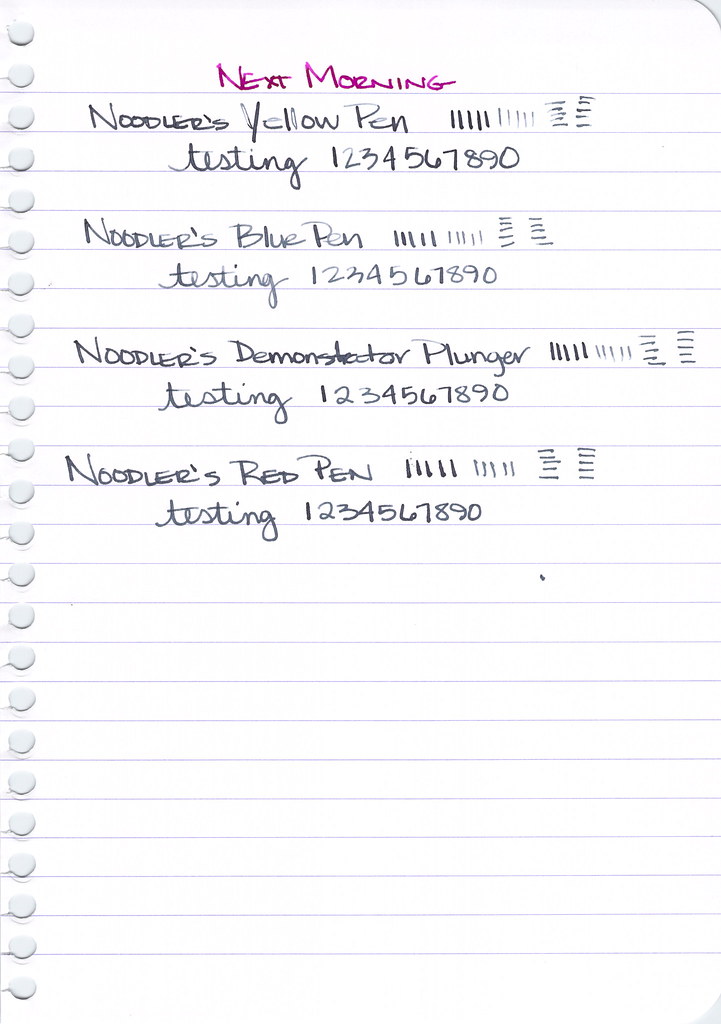 To the defense of Noodler’s for a moment . . . These pens are made to be tinkered with. If you’re a fiddler and you want to fiddle, maybe you’ll have more success than I have had.

I watched Brian Goulet’s video. I tried. I freakin’ tried (and then blamed myself? no.).  I have come to the conclusion that I’m willing to tinker a little, but I mostly just want my pens to write when I pick them up. You know?

I’ve also concluded that Noodler’s pens are inconsistent as a whole. I wouldn’t be at all surprised if I went out to the living room, picked up the blue one, and it didn’t lay down a single line of ink. Likewise, that plunger-fill pen might just work today.

And it’s that inconsistency that I cannot stand.  Noodler’s pens are not for me.  Noodler’s inks are a different story!

That’s it from me this week.  Hope you all have a good weekend.

//instagram.com/p/tmiqpsm2ZR/embed/
just a little something i posted on instagram earlier this week

“Each print is a beautiful recreation of the original label and ink it represents.” Noodler’s Ink

“This pen boasts a bold sleek industrial design that will stand out from the crowd.” Ed Jelley

“It’s not exactly the west coast but it is the other side of the Mississippi.” FP Quest

“I went through the first handle bag looking for the little brown bag holding my Akkerman boxes.” From The Pen Cup

“There’s something unsettling about buying unrefrigerated milk.” The Impulsive Buy

“Should I negotiate a lower salary?” Ask a Manager

“It has all the rich flavor of ketchup with a hint of smoky BBQ and a boozy undertone.” Minimalist Baker

What are your plans for the weekend? We have a long list of things that need to be done around the house. Pretty sure we’ll be able to squeeze some fun in along the way, too.

I’ve been struggling with my Midori and talk about it a little on Instagram.

Fountain Pen Physicist got all geeky with cartridges.

I’m a Pilot Vanishing Point addict and proud. Totally getting the new Limited Edition in Copper.

What Weird Things Do You and Your Partner Always Argue About? Mr. Pentulant and I argue about how to load the dishwasher. I “let” him win and now he loads the dishwasher all of the time. (The comments are just as funny as the video!)

7 Strange Questions That Help You Find Your Life Purpose it’s full of . . . uh . . . colorful language, but there are some good points and questions here.

Did you see that Laurie Huff of Plannerisms is blogging for Quo Vadis? She’s going to be great!

What are your plans for the weekend?  We’re visiting with friends and celebrating Mr. Pentulant’s birthday. Woooo!

I’m happy to say that Francesca is the big winner of the bottle of Diamine Sepia ink pictured above. Francesca was randomly chosen from all of the entrants and I’ve already contacted her to arrange getting the bottle of ink off to her.  Yaay!

Well Appointed Desk and how Crayons are Made. I love crayons. The smell.

Fountain Pen Physicist unboxed her Hobonichi. I did, too, I just didn’t get pictures 😉

Inklode showed us Pelikan Edelstein Turmaline. Not really a color I’d considered before seeing this review.

Pen Addict took a close look at the Sailor Lecoule. I have one of these and had it inked last week – it was a terrible writing experience. Maybe I’ll have a look at the nib and see if I can do anything about that.

The Unroyal Warrant had a paper review for us. I think paper isn’t given nearly the attention it deserves in the pen community. Oh..and did you get your Unexposed Field Notes?

Hope you all have a great weekend!

You all know I’m a huge fan of Instagram and think you should follow me there, right?

I post all kinds of things that never make itthere.

Are you on Instagram? If you’re posting on Instagram about pens and paper and other fun stuff, I’d love to follow you. Just leave your user name in the comments and I’ll see you there.

Have a great weekend, everyone.

After tossing all of the wonderful entries up into the air, Onder C was randomly selected as the big winner of the $50 gift certificate. As you probably remember, Onder can choose a $50 gift certificate from either Amazon or Goulet Pens.  Thank you for playing and keep an eye out for future giveaways!

I’ve owned Pentulant.com for quite sometime, but only recently got it set up. This means that instead of going to the Blogger URL, you can just come directly to Pentulant.com and see everything. Go ahead, check it out, click the link. Fun, right? My hope is to have a redesigned site sometime around the beginning of January – we’ll see how that goes 😉

I’m listed on Pennaquod. It’s a search thingy powered by Google just for pen nerds and their blogs. My stuff doesn’t come up very often – sounds like it’s a Blogger thing and hopefully that will be fixed when I move to my own site.

TWSBI has re-released their Classic Fountain Pen. Gorgeous pens and now able to be posted. I asked on Instagram and I’m told that there will be a kit available for those of us who bought the unpostable (it’s a word!) version. I’ll be first in line for that kit, yo.

I ordered a Hobonichi 2015 Planner and cover earlier this week. I’m not 100% sure it’s going to work for me – doesn’t the show-through of Tomoe River Paper make it difficult to use? Brush Dance Planners (120 gsm paper!) and Date Books (not as fountain pen friendly) are super-nice and I use them all day, everyday. (I’m the president of Brush Dance, but they are really terrific items.)

Annnnnd here’s what I’ve been reading this week . . .

Mr. Mike Dudek of The Clicky Post shows us the Pilot Murex with an integrated nib.  Love.

FP Physicist reviewed a Quiver – she wasn’t crazy about it.

Gourmet Pens took an in-depth look at the Taccia Savanna. It’s made of BUFFALO HORN! Who knew!

Inkdependence shows off the Franklin-Christoph music nib. I want. I don’t like stubs. I want. I really thought it would be more – it’s $35.

Some of my most recent posts over on Instragram for your viewing pleasure . . .

Hanging on to summer with some sweet Lamy Safari Fountain Pens . . .
//instagram.com/p/sXYxE5m2TY/embed/

That’s it from me this week!

What have you been reading?